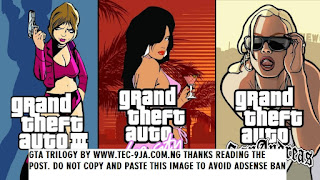 GTA trilogy which contains games from previous editions of GTA starting from GTA 3, to GTA vice city  and to GTA San Andreas.

Telegram New Update 2021: All you need to know.
“Lyrics Not Showing”.- Problem fixed, how to check the new update by Spotify on your various Devices.

The GTA trilogy as explained previously contains games from GTA 3, to vice city and San Andreas for the new generation of gamers, who want to enjoy gaming from the Ps5, Xbox one S, X box one X or the more lucrative pc gamers.
The new trilogy comes with some more extensively detailed graphics, it also comes with new lighting and environment conditions upgrades,
The game goes for as low as $59.95 dollars on the official Rockstar store and you can purchase it for your various consoles and it also comes with some requirements to purchase and download for Pc gamers.

The GTA trilogy all starts from the so called liberty city, the city gives you freedom to go anywhere and jack people walking on the streets. The ruthless world of crime is at your finger tips if you have the guts to take it on GTA Liberty remastered.

Then the next stage of the trilogy comes with the vice city the definitive edition. The vice city takes you back to the 1980s, from the decade of big hair and pastel suits and it plays the story of one man rise to the top of the pinnacle of criminal activities. This story returns with the tale of Tommy Vercitti story of betrayal and revenge.

The third section of the trilogy comes with the San Andreas which portrays the early 90s, a story about Carl Johnson “CJ”, after been framed by his fellow cops of homicide, he then decides to take matter into his own hands, trying to save his family and also staying in the mix of criminal activities.

ABOUT THE NEW UPDATES AND FIXES FOR THE NEW GTA TRILOGY REVIEW.

Following its really precedented apology, Rockstar games decided to roll out updates quickly for the game in order to please the Everly disappointed gamers.
The post on the Rockstar official page contains a version 1.02 which will be released to all available gaming platforms’ patch contains a fix for specifically vice city noted bug.
According to the release of the patch there has also been some update to rain effects glitch on Gta san Andreas.
Rockstar has also noted that there will be some couple of patches to also roll out for the coming weeks, and have sincerely apologized for their unprecedented series of bugs.

REQUIREMENT SPECIFICALLY FOR THE PC USERS BEFORE THEY SHOULD DOWNLOAD.