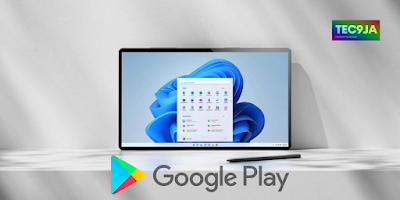 Alphabet inc, during the Game awards, recently announced the arrival of google play store on windows 11, most users were surprised when they also allowed the support for windows 10 related devices. Interestingly google haven’t  partnered with windows, Bluestacks or any other said emulator  for this said release which was said to be by sometime in 2022.

Users will be able to enjoy all android application and download them directly to their pc. We have not received any updates concerning how it will work exactly, but in a statement to the verge google spokes person Alex Garcia said:

Starting in 2022, players will be able to experience their favorite Google Play games on more devices: seamlessly switching between a phone, tablet, Chromebook, and soon, Windows PCs. This Google built product brings the best of Google Play Games to more laptops and desktops, and we are thrilled to expand our platform for players to enjoy their favorite Android games even more. […] This will be a native Windows app distributed by Google, which will support Windows 10 and up. It will not involve game streaming.

Google also said that the solution will not be powered by cloud streaming, it will also enable you to seamlessly switch between your various devices from android to pc and your other devices. while google announced this, users are still waiting for a release date.